How We Help Our Friends

On any Friday morning at 8:30AM at the Denny's restaurant in Laurel, Maryland, you will find a group of men having breakfast. When you look at the group, you may notice that some of the men may look like the homeless person you saw standing on the corner a few days ago. It may actually be that same person. Like most cities in the United States, Laurel has a problem with homelessness due to poverty. Often poverty is described as a lack of material things. Anyone can find themselves in a situation when they have lost their home and possessions due to almost any catastrophic circumstance, such as loss of a job, major illness, addiction or even a tragic personal loss.

This is what New Day calls the brokenness of the world. All of us have broken relationships: with God, with ourselves, and with others! A group of churches in the Laurel area have operated a Winter Shelter program in the past few years. 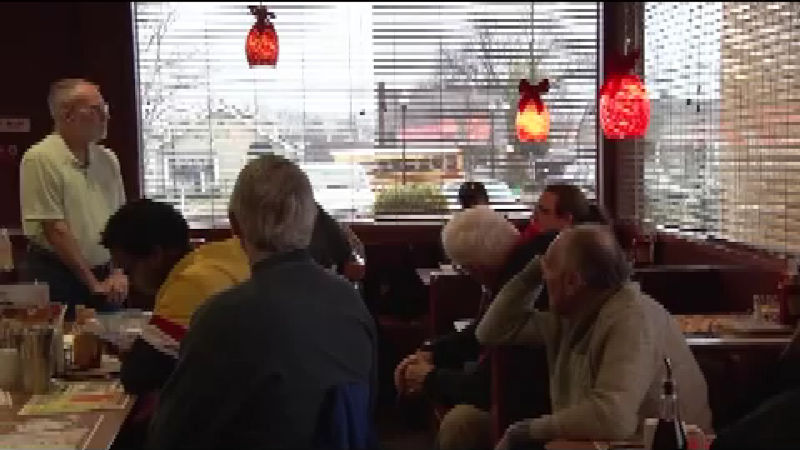 They provide a warm place for the homeless to sleep during the cold months of the year.

Hank Crosswhite, the Secretary/Treasurer of New Day, attends Bethany Community Church which is one of the churches in the Winter Shelter program. While talking with the men of Bethany Community Church, Hank felt that part of the reason that people find themselves living on the edge is because they have lost touch with their support network for one reason or another, so he proposed the First Friends Breakfast to help these homeless men restore their relationships.

This was the beginning of First Friends in 2013. Since that day, each Friday morning at 8:30, you will find men from several different churches who want to help others joining together with a group of homeless or formerly homeless men to pray, study the bible and share a meal together. After the server takes everyone's orders, Hank opens with prayer and bible study while waiting for the food. Then as the men eat their food they build relationships and friendships with each other as they talk and tell their stories. When you are homeless and alone, having someone to listen to you and care about you is sometimes more fulfilling than the food that you are eating.

This is also a chance for the men to network, just as in a large business meeting, and learn about jobs and opportunities to help them find work. Some of the men are skilled tradesmen such as electricians, carpenters and plumbers who have lost everything and find it difficult to find work since they no longer have transportation to job sites. Some of the men are veterans who have served their country proudly and now feel abandoned. Hank has made a point of knowing all the men's names and their personal stories. Here is where they find new friends and people who care for them and feel better about themselves and begin healing their brokenness. Many of the men now come more for the fellowship and worship more than for just a meal. First Friends Breakfast has been covered in the PG Gazette in January 2015 and on Laurel TV in 2016.